American workers and companies will decide this competition. America's comparative advantage lies in the resiliency of our economic model, our innovative spirit, our respect for the middle class and our enduring belief that when our workers prosper, we all prosper.

Exports help American companies win. Exports open markets and revenue streams for American companies and thereby generate economic value for workers and businesses. They also advance U.S. comparative leadership in the industries that are vital to America's prosperity and security in the 21st century.

But when the field is not level, U.S. exporters cannot go it alone. The industrial policies and business practices of the People's Republic of China (PRC) undermine the ability of American exporters to compete fairly in the global marketplace. 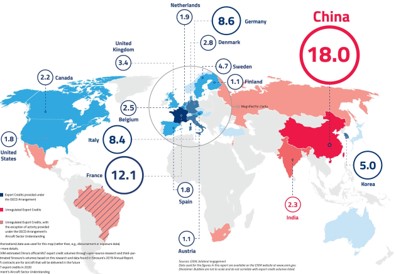 During the last two decades, exporters report that China's technology infringement and active use of export credit abroad has restrained U.S. access to the 95 percent of consumers residing outside the U.S.

Most of the world's nations have some form of export credit agency (ECA), but China's ECAs alone are the largest in the world. Foreign ECAs have become increasingly proactive, innovative, and flexible to best support their exporters, including small businesses facing foreign competition globally. 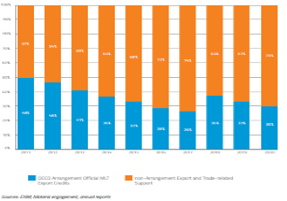 In that environment, the PRC engages in the most aggressive and expansive export credit activity. As a result of COVID-19 in 2020, China's official MLT official export credit support appeared to decrease from about $33 billion in 2019 to about $18 billion in 2020, but its volumes remain significantly higher than all other major providers. Despite this decline, Chinese official export and trade-related financing continues to be a competitive challenge to the U.S.. Many academic researchers and China "watchers" reported the downscaling of Chinese activity is intended to yield programs that are more effective in facilitating long-run goal accomplishment rather than a retreat from emphasizing export and trade-related financing in pursuit of national objectives.

Within that context, in EXIM's December 2019 reauthorization (P.L. 116-94), Congress directed EXIM to establish a "Program on China and Transformational Exports" (see Sec. 402).

The Program's function is to support the extension of loans, guarantees, and insurance, at rates and on terms and other conditions, to the extent practicable, that are fully competitive with rates, terms, and other conditions established by the PRC or by other covered countries (as designated by the Secretary of the Treasury). The law charges EXIM with a goal of reserving not less than 20 percent of the agency's total financing authority (i.e., $27 billion out of a total of $135 billion) for support made pursuant to the program.

The Program's purpose is to directly neutralize export subsidies for competing goods and services financed by official export credit, tied aid, or blended financing provided by the PRC or by a covered country and advance the comparative leadership of the U.S. with respect to the PRC, or support U.S. innovation, employment, and technological standards, through direct exports in the transformational export areas.

Additionally, during EXIM's 2020 "Strengthening American Competitiveness" initiative - where more than 1,000 stakeholders participated - many U.S. stakeholders and financial institutions identified EXIM's content policy as the greatest challenge to EXIM supporting their export sales. This concern was validated through EXIM's extensive discussions with exporters across numerous sectors, including specifically when it comes to neutralizing the PRC and supporting transformational exports.