WASHINGTON – The Export-Import Bank of the United States convened its first meeting of its 2022-2023 Advisory Committee, chaired for a second consecutive term by former U.S. Senator Heidi Heitkamp. The Committee is one of two congressionally mandated committees.

Committee members were briefed on EXIM priorities, such as the Make More in America Initiative and EXIM’s Competitiveness Report. Also in attendance was the Chair of EXIM’s Sub-Saharan Africa Advisory Committee, Jude Kearney, and the Chairs and Co-Chairs of the four Advisory Councils: Rachel Kyte, Nicole Elam, Bob Dreisewerd, and Nancy Flake Johnson. 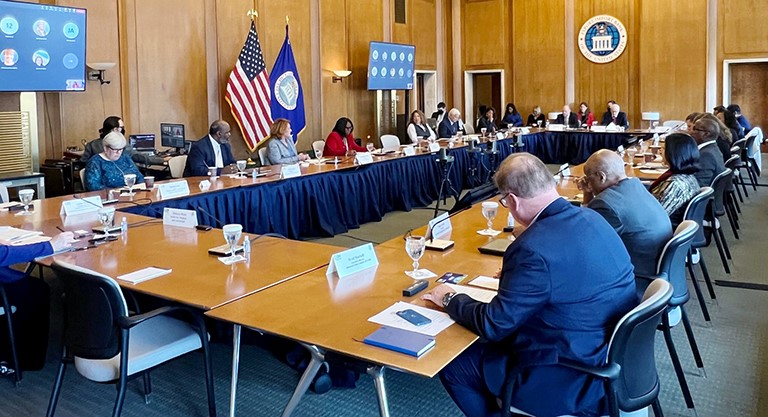 The U.S. Department of State’s Assistant Secretary for the Bureau of Economic and Business Affairs, Ramin Toloui then delivered virtual remarks, outlining the Department’s efforts to bolster and enhance U.S. supply chains before holding a brief question and answer session.

Chair Heitkamp then opened the meeting for discussion and public comment.

“I am excited to serve as Chair of the Advisory Committee for the second consecutive year and I thank Chair Lewis for the opportunity to continue at the helm of this important group of industry leaders,” said Sen. Heitkamp. “The work that this group does is immensely important to EXIM as it moves into a more modern era, and I am eager to continue supporting America’s exporters.”

“I am very much looking forward to the year ahead with our Advisory Committee as we continue to advance EXIM initiatives like Make More in America,” said Chair Lewis. “The recommendations and expertise from committee members are integral as EXIM enters into a new era defined by increased transparency, accountability, and modernization.”

EXIM’s Advisory Committee is comprised of individuals in the private and public sectors who volunteer to represent various facets of the U.S. economy, including agriculture, commerce, environment, finance, labor, production, services, and small business. The committee members serve for one year and provide input to EXIM on the effectiveness of its policies and programs in support of U.S. exporters and American jobs.