WASHINGTON – As America celebrates Black History Month, Reta Jo Lewis today became the first Black woman and person of color to head the Export-Import Bank of the United States (EXIM) since its founding 88 years ago. Joined by her three siblings, Lewis was sworn in as EXIM’s President and Chair by Vice President of the United States Kamala Harris. The ceremony took place at the Vice President’s ceremonial office at the White House in Washington, D.C.

“Today is the start of a historic new chapter for the Export-Import Bank,” said Chair Lewis. “I am deeply humbled by the faith President Biden has placed in me. I will lead the agency with high standards and work tirelessly to lift the agency towards fulfilling its mission.”

“Americans are the strongest, most hardworking people on Earth. I am extremely proud that I will have the opportunity to support the small businesses that are the backbone of our country’s economy,” Chair Lewis continued. “As we move forward, EXIM will work to expand outreach to historically under-served businesses, enhance collaboration and partnerships with state and local officials, and ensure that as our nation’s economy recovers from the COVID-19 pandemic American companies and American workers can count on EXIM standing shoulder-to-shoulder with them as they compete around the globe.”

Chair Lewis, a native of Statesboro, Georgia, arrives to EXIM with deep expertise across international affairs, having served in leadership roles at the White House, U.S. Department of State, German Marshall Fund of the United States, the U.S. Chamber of Commerce, and in international law. She takes the helm with a commitment to fight for American exporters and American workers as they recover from the COVID-19 pandemic. 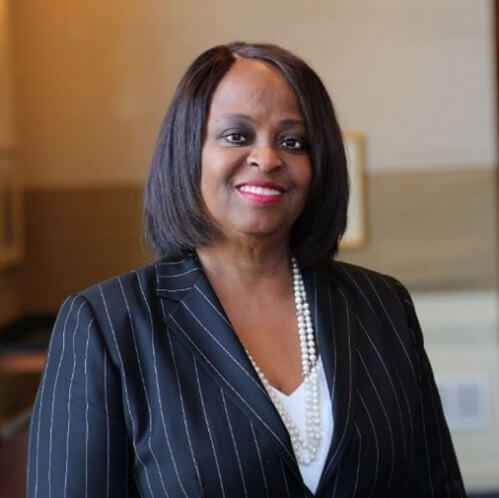 On February 9, 2022, the U.S. Senate confirmed Reta Jo Lewis as EXIM’s President and Chair of Board of Directors. Chair Lewis was sworn in by Vice President of the United States Kamala Harris on February 16, 2022. Ms. Lewis is a senior executive with over 25 years of leadership experience in international affairs, legal, public policy, business and regulatory affairs, and subnational diplomacy.

Ms. Lewis was most recently a Senior Fellow and Director of Congressional Affairs at the German Marshall Fund of the United States. At GMF, Ms. Lewis led and oversaw initiatives, programs, and bipartisan exchanges for members of the U.S. Congress and their European counterparts, focusing on leadership development and subnational diplomacy efforts. Prior to her time at GMF, she served as the first-ever Special Representative for Global Intergovernmental Affairs under Secretary Hillary Clinton at the U.S. Department of State during the Obama-Biden Administration. As Special Representative, Lewis was the chief diplomat in charge of the international efforts to build and support strategic relationships between the federal government, state and local leaders, and their foreign counterparts. In 2013, she was awarded the Secretary’s Distinguished Service Award.

Ms. Lewis was the first Black woman to serve as an Officer at the U.S. Chamber of Commerce, working as Vice President and Counselor to the President. She led the Chamber’s initiatives focused on fostering strategic alliances between small businesses, especially women- and minority-owned businesses, entrepreneurs, and executives. She is a Life Member of the Council on Foreign Relations and Member of the Board of the Leadership Council for Women in National Security.

Ms. Lewis received a J.D. from Emory University School of Law, an M.S.A.J. from American University, and a B.A. from the University of Georgia. She is a native of Statesboro, Georgia.