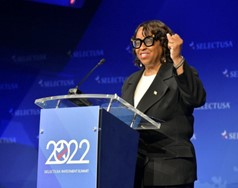 In her remarks, Chair Lewis highlighted EXIM’s key priorities as she approaches her first 100 days on the job, including resetting EXIM’s relationships with exporters and buyers around the world, renewing EXIM’s commitment to supporting the creation of jobs in the U.S., and rebuilding EXIM’s priorities to meet the challenges in this new era. Chair Lewis also outlined several exciting opportunities for EXIM to finance U.S. exports in key areas such as clean energy technology as well as U.S.-based manufacturing projects with an export nexus through the Make More in America Initiative.

“At a time when companies across the country are rethinking and reorienting their supply chains, Make More in America will help onshore jobs in sectors that are critical to our economic and national security and create new opportunities for small- and medium-sized businesses working in large supply chains. Ultimately, we need to make more in America and export more from America,” said Chair Lewis.

Chair Lewis also spoke about EXIM’s support and commitment to President Biden’s newly announced Partnership for Global Infrastructure and Investment (PGII), which will leverage EXIM’s tools and resources to fill critical gaps in financing and enhance the competitiveness of American companies in the global marketplace.