Owen Herrnstadt Sworn in by U.S. Senator Amy Klobuchar as Member of Export-Import Bank Board of Directors

WASHINGTON – Owen E. Herrnstadt was ceremonially sworn in yesterday by U.S. Senator Amy Klobuchar from Minnesota, as a Member of the Board of Directors of the Export-Import Bank of the United States (EXIM). 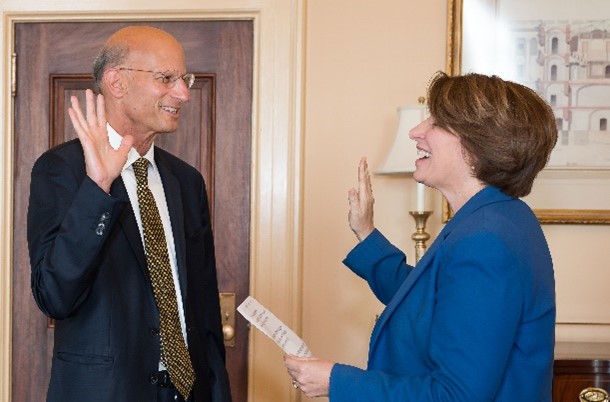 Mr. Herrnstadt brings to EXIM more than 30 years of leadership experience working to advance global trade and human rights that benefit working people. He has extensive experience advocating for American workers, to enhance their global competitiveness.

“If we want America to compete and lead in the 21st century, we need thoughtful leaders at the Export-Import Bank who understand the importance of engaging in the global economy in a way that works for everyone. With his extensive experience working with business leaders and union workers alike, Owen Herrnstadt is the right person to help our country meet this moment as a Board Member of the Export-Import Bank,” said U.S. Senator Amy Klobuchar.

“Mr. Herrnstadt’s prior experience as an Advisory Committee member to EXIM will be integral as we advance our mission to empower the American worker,” said EXIM President and Chair Reta Jo Lewis. “I am eager to work with Mr. Herrnstadt as the team at EXIM continues resetting EXIM’s relationships with exporters and buyers around the world, renewing the agency’s commitment to supporting the creation of jobs in the United States, and rebuilding EXIM’s priorities to meet the challenges in this new era.”

“I am excited to return to EXIM in my new capacity as a Member of the Board of Directors,” said Mr. Herrnstadt. “I look forward to working with Chair Lewis, Vice Chair Pryor, and Director Bachus to fulfill EXIM’s important mission of helping U.S. workers win the 21st century.”

On July 13, 2022, the U.S. Senate confirmed Owen E. Herrnstadt to be a Member of the Board of Directors of the Export-Import Bank of the United States. Mr. Herrnstadt was ceremonially sworn in by U.S. Sen. Amy Klobuchar of Minnesota on August 2, 2022.

Mr. Herrnstadt has taught employment and labor law as an adjunct professor at Georgetown University’s National Law Center and international employment and labor law at American University’s Washington College of Law. He is a member of the Council on Foreign Relations and a former member of the U.S. Export-Import Bank Federal Advisory Committee, U.S. State Department Federal Advisory Committee on International Economics, Co-Chair of the State Department’s Stakeholder Advisory Board on OECD Guidelines, Independent Mexico Labor Expert Board and the Industry Trade Advisory Committee 1 (Aerospace). Mr. Herrnstadt has also served as Chair of the Board of Directors of the Baltimore Branch of the Federal Reserve Bank of Richmond. He has made numerous presentations on labor and employment law, international employment and labor law, corporate social responsibility, trade, manufacturing policy, human rights, and industrial relations in the U.S. and abroad.

Mr. Herrnstadt has written numerous articles and has testified before Congress and federal agencies on numerous matters, including labor and employment law, as well as trade and manufacturing policy. He is a Fellow in the College of Labor and Employment Law and served as a Research Associate at the Economic Policy Institute. He has received the Outstanding Practitioner Award and the Practitioner Fellow Award by the Labor and Employment Research Association and the Georgetown University Silver Vicennial Award in recognition of service to the Georgetown community.

Mr. Herrnstadt was born in Ames, Iowa and received his BS, MS (Industrial Relations) and JD degrees from the University of Wisconsin-Madison.