EXIM Online and ELMS services have been restored.

WASHINGTON – President and Chair of the Export-Import Bank of the United States (EXIM) Reta Jo Lewis yesterday hosted a delegation from Ukraine led by Governor of the National Bank of Ukraine, Kyrylo Shevchenko, and Minister of Finance, Sergii Marchenko, along with other senior officials from the Ukrainian government. 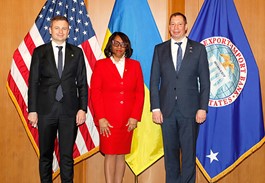 “I was deeply honored to host the delegation from Ukraine, especially in light of the ongoing war with Russia,” said Chair Lewis. “EXIM is deeply committed to our relationship with Ukraine. The Export-Import Bank and all our partners in the United States – both government and private sector – stand with Ukraine and stand ready to be part of Ukraine’s efforts to rebuild.”

EXIM has a long history of working with Ukraine dating back to the 1990s and has supported a range of sectors including agriculture, mining, and infrastructure projects. In July 2021, EXIM signed a $3 billion memorandum of understanding with Ukraine’s Minister of Economic Affairs regarding financing on a variety of key infrastructure opportunities, including rail and road infrastructure initiatives and financing for a countrywide hydro-meteorological project.

Last month, in solidarity with Ukraine, EXIM issued a joint statement with export credit agencies from the U.K. and Canada condemning the attack on Ukraine and withdrawing any new export finance support for Russia and Belarus. Also, as of March 2022, the EXIM Board voted to officially close for new business in Russia.

The group discussed ways EXIM financing could facilitate rebuilding in Ukraine and the roles American companies can play as Ukraine rebuilds its infrastructure.