Bangkok - The Export-Import Bank of the United States (EXIM) and Nippon Export and Investment Insurance of Japan (NEXI) announced today that they have completed a reciprocal co-financing agreement. EXIM and NEXI are the export credit agencies (ECAs) of the United States and Japan, respectively.

The co-financing agreement was signed by EXIM President and Chairman Kimberly A. Reed, and NEXI Chairman and CEO Atsuo Kuroda at the Indo-Pacific Business Forum during the East Asia Summit held in Bangkok, Thailand.

"EXIM is very pleased to enter into a new reciprocal co-financing agreement with NEXI," said EXIM President and Chairman Kimberly A. Reed. "This agreement demonstrates government-to-government cooperation between the United States and Japan in accord with the Indo-Pacific Strategy and is part of the U.S.-Japan Economic Dialogue. We look forward to working with NEXI to expand export opportunities in both of our countries."

"We agree to expand our collaboration further, by making the co-financing agreement reciprocal," said NEXI Chairman and CEO Atsuo Kuroda. "It will be more possible for Japanese companies to collaborate with American companies in infrastructure projects and is expected to expand investment by Japanese and American companies in the Indo-Pacific region. We will continue to contribute to the development of infrastructure projects in the 'free and open Indo-Pacific region.'"

Prior to the new agreement, EXIM and NEXI worked together under a co-financing agreement wherein only EXIM could act as the lead ECA. In light of the increased U.S.-Japan cooperation under several initiatives of the administration of President Donald J. Trump, EXIM and NEXI entered into the new agreement wherein either ECA can act as the lead on future transactions to be co-financed by both EXIM and NEXI. The expanded scope of the agreement is anticipated to facilitate greater business opportunities for exporters of both nations. 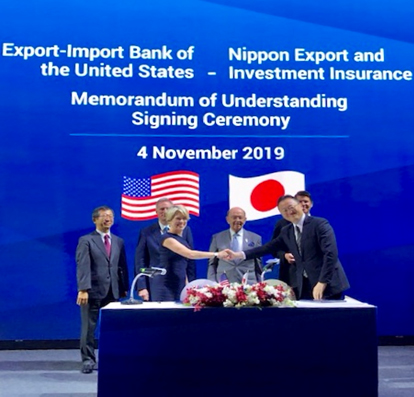