Washington, D.C. - Continuing its support of the space industry in America, the Export-Import Bank of the United States (Ex-Im Bank) has authorized a $105.4 million loan to Space Communication Ltd. of Ramat Gan, Israel, to finance the Space Exploration Technologies (SpaceX) launch of the Amos-6 communications satellite, the purchase of American made-solar arrays, and insurance brokered by Marsh USA (Marsh). 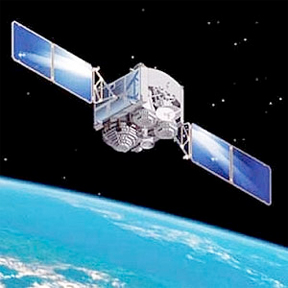 Artistic rendition of the AMOS-6 satellite.

Satellite financing represents Ex-Im Bank's most prominent stand-out sector in the Bank's newly transformed portfolio. Just three years ago, satellites accounted for only $50 million in authorizations per year. This year numbers as the third consecutive year in which Ex-Im Bank's satellite sector authorizations will have topped $1 billion.

Amos-6, a geosynchronous satellite, will replace Space Communication's Amos-2 and cover markets in Central and Eastern Europe and the Middle East. The satellite will also provide pan-European coverage and broadband services in Europe and Africa.

Founded in 2002 and headquartered in Hawthorne, Calif., SpaceX designs, manufactures and launches rockets and spacecraft. It is the first private company to build, launch, and dock spacecraft at the International Space Station, a mission previously accomplished only by government space entities.

ATK Space Systems Inc., a participant in the transaction and a manufacturer of the solar arrays for the satellite, is a member of the ATK Aerospace Group. The company provides a broad portfolio of products and services that include integrated satellite bus systems, world-class multidisciplinary engineering services, and market-leading integrated thermal-control systems.

Founded in 1871, Marsh is a global leader in insurance brokering and risk management. The company has approximately 26,000 colleagues who collaborate to provide advice and transactional capabilities to clients in over 100 countries.