Commitment Enhances Alliance and Economic Cooperation Between the United States and Brazil; Promotes Jobs in Both Countries and U.S. Exports in Telecommunications (including 5G), Energy, Infrastructure, Logistics, Mining, and Manufacturing
Media Contact Name/Phone
Office of Communications (202) 565-3207

BRASILIA - Export-Import Bank of the United States (EXIM) President and Chairman Kimberly A. Reed today signed a memorandum of understanding (MOU) with Brazil Minister of the Economy Paulo Guedes, in order to promote investment in Brazil and enhance the strong alliance and trading relationship between the two countries. President Jair Bolsonaro of Brazil, U.S. National Security Advisor Ambassador Robert O'Brien, Brazil Minister of Foreign Affairs Ernesto Araujo, and U.S. Ambassador to Brazil Todd Chapman participated in the signing ceremony. The ceremony took place at the Palacio Itamaraty in Brasilia.

Under the agreement, EXIM and Brazil agree to explore and identify potential opportunities for EXIM financing in a total aggregate amount of up to $1 billion. EXIM and Brazil also agree to identify areas to work together to promote investment and business development opportunities, particularly in the telecommunications (including 5G), energy (including nuclear, oil and gas, and renewables), infrastructure, logistics, mining, and manufacturing (including aircraft) sectors.

"This agreement builds on the already strong economic relationship between the United States and Brazil and affirms our commitment to potential projects in Brazil that could be supported with U.S. goods and services," said Chairman Reed. "We intend to work together to promote investment and business development opportunities, leading to potential benefits for U.S. and Brazilian workers and businesses. This is a milestone that will increase trade between our two nations, enhance the freedom and prosperity of the Brazilian people, and support jobs in both our countries."

"We have long collaborated on a wide variety of issues-and today, our nations are closer than ever," said Ambassador O'Brien. "In fact, I don't think we've had a better relationship with Brazil than the United States has today. Brazil saw today the signing with Minister Guedes and Chairman Reed of a Memorandum of Understanding to identify sectors for cooperative business development that will lead to another $1 billion in EXIM financing especially in the telecommunications area and the important 5G-a new modern telecommunications network that Brazil will have soon." 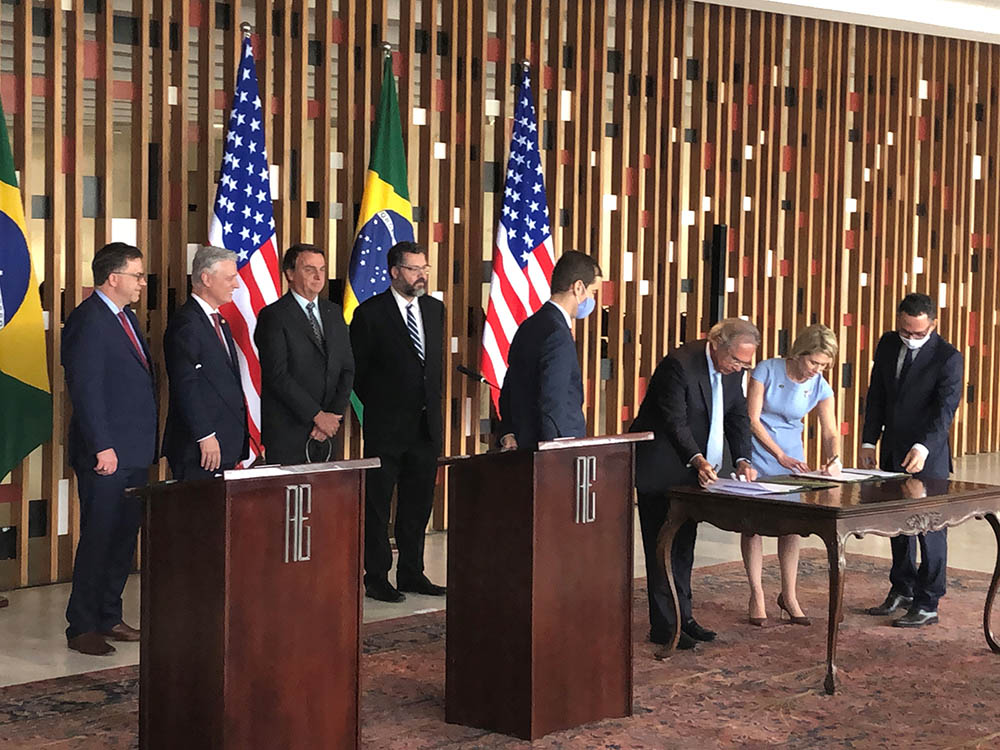 Minister Guedes pointed that the agreement with EXIM "comes at the exact moment when our infrastructure, logistics, cabotage, mining, oil, natural gas, this entire investment horizon begins to be unlocked." According to the Minister, the agreement will be an important step towards trade facilitation and the convergence of regulatory frameworks. "In the first year and a half of our government, we focused on public spending and now we are opening up the investment horizons," he explained.

The MOU was signed during a U.S. delegation trip to Brazil, led by Ambassador O'Brien that focused on how the United States and Brazil can promote freedom, economic growth, jobs, and prosperity for both countries.