EXIM Board of Directors Approves Preliminary Commitments for U.S. Exports to Projects in Cameroon and Iraq

Washington, D.C. - Today the Board of Directors of the Export-Import Bank of the United States (EXIM) approved two preliminary commitments of EXIM financing support for U.S. exports to pending projects in Cameroon and Iraq, thus enabling two U.S. businesses, their workers, and their supply chains to be better-positioned to win and secure the respective contracts. 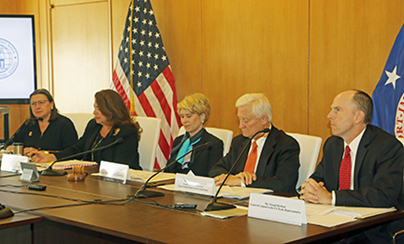 "These actions were taken in response to American businesses who told us that EXIM's preliminary commitments can help them compete successfully for international projects," said EXIM President and Chairman Kimberly A. Reed. "In these potential transactions and all others, EXIM is committed to finding reasonable assurance of repayment to protect the interests of American taxpayers and meeting all of the requirements of the agency's charter and policies."

The board approved a preliminary commitment indicating potential EXIM support for U.S. exports of construction equipment and related goods and services from a small business, Hoffman International Inc. in Piscataway, New Jersey, to Cameroon. The transaction will support an estimated 400 jobs in the states of Florida, North Carolina, Pennsylvania, Wisconsin, Indiana, New Jersey, Illinois, Ohio, and Minnesota. The buyer and end-user is an independent agency of the Cameroonian government that focuses on infrastructure development at the local level.

"This EXIM preliminary commitment will help an American small business in competition with China to secure a major contract in Cameroon. EXIM is committed to supporting President Trump's Prosper Africa initiative by helping U.S. businesses, small and large, to increase sales to this vital region of growing demand," Reed said. "If the application advances to a final commitment, it also would demonstrate EXIM's commitment to meeting two of our congressional mandates-support for American small businesses and increasing U.S. exports to sub-Saharan Africa."

In a separate action, the board approved a preliminary commitment indicating potential EXIM support for U.S. exports of gas-processing equipment and related goods and services from Honeywell UOP, headquartered in Des Plaines, Illinois, to a gas-recovery project in Iraq, where presently associated gas from operating oil fields is being flared into the air. When operational, the project will support an estimated 1,400 American jobs in Oklahoma and Illinois. It is expected to reduce emissions from the flared gas and capture it for use in the production of electricity, helping to lessen Iraq's dependence upon gas imports from Iran.

Prior to final board approval, the transaction would require posting in the Federal Register and a 35-day notification period for comment by Members of Congress.

"If the application for this project advances to a final commitment, EXIM would be able to help a U.S. exporter, its suppliers, and more than a thousand U.S. workers realize a great opportunity to assist in the reconstruction and redevelopment of Iraq. The project would benefit Iraq's energy sector, environment, and security-enhancing the quality of life for the Iraqi people," Reed added.

In a step to increase the degree of accountability and transparency at EXIM, the board also voted to eliminate the agency's "undersupply list," which had been a consideration in determining the applicability of EXIM's analysis of economic impacts. The list identified commodities for which the United States formerly was heavily dependent on imports (e.g., oil and gas), and applications related to those commodities had been screened out at an earlier stage. The effect of today's board action is that all applications for EXIM loan and guarantee products now are potentially subject to a detailed analysis of the potential economic impacts of the proposed exports on the related U.S. industries. The decision will result in a greater number of applications being subject to more detailed analyses of possible economic impacts, yielding more accountability and transparency.

Additionally, the board received an update from the Office of Small Business on the agency's current support for small businesses, including a goal of increasing outreach to small businesses in both urban and rural communities. The office reported it has authorized 1,504 transactions valued at $1.5 billion so far in fiscal year 2019.

The board also approved members of the EXIM Advisory Committee and the Sub-Saharan Africa Advisory Committee. These Advisory Committees, mandated by Congress, serve an important role in advising EXIM on its programs, including on the extent to which the agency provides competitive financing to support American jobs through exports.

The board received a presentation on EXIM's cover policy and its linkage to the budget-cost-level ratings of the U.S. Government's Interagency Country Risk Assessment System (ICRAS) in which EXIM participates. The board voted to approve proposed cover policy changes for Ecuador and Nepal that will be reflected in the agency's Country Limitation Schedule as of August 9, 2019.