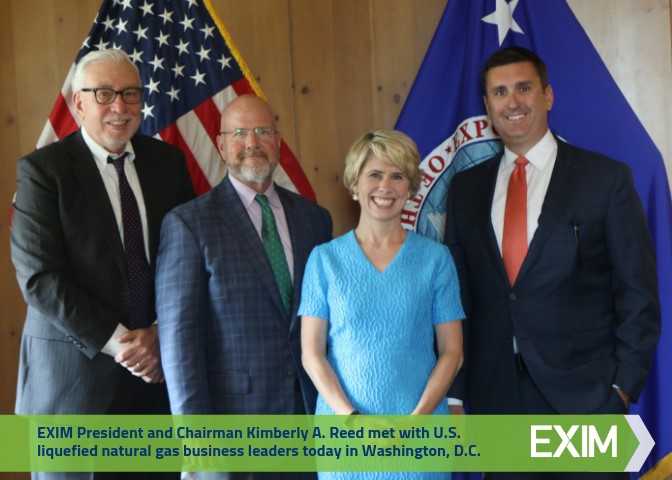 Chairman Reed led the teleconference discussion at EXIM and was joined by representatives from the American Petroleum Institute, Center for Liquefied Natural Gas, LNG Allies, and the U.S. Chamber of Commerce.

"President Trump is committed to putting 'America First' by securing our energy dominance, growing our economy, and creating U.S. jobs. EXIM is a powerful tool in the toolbox in achieving the president's agenda," said EXIM President and Chairman Kimberly A. Reed. "Today's discussion with representatives from various LNG-related associations was productive, and we hope that it will lead to creative and innovative solutions that will increase domestic exports of LNG."

"The global LNG market is very competitive and U.S. LNG producers appreciate the active engagement by EXIM to try and assist in providing much-needed financing solutions," added LNG Allies President and CEO Fred H. Hutchinson. "EXIM's involvement would be particularly valuable to the next wave of U.S. LNG export projects that will set the stage for significant growth in the industry."

"We commend the leadership of EXIM Bank President and Chairman Reed for convening a discussion to unlock global opportunities for clean and abundant U.S. natural gas," said American Petroleum Institute Vice President of Government Affairs Bill Koetzle. "The U.S. shale revolution coupled with rising global energy demand has led to unprecedented energy infrastructure investments that are connecting cleaner and reliable American energy to countries across the world - improving livelihoods of Americans and allies abroad and reducing emissions. We thank Chairman Reed for her leadership and look forward to working with her and the Administration on continued U.S. energy development, use, and exports."

"In a competitive and growing global market, U.S. LNG exports are producing good paying jobs and investments at home and environmental benefits abroad," said Center for LNG Executive Director Charlie Riedl. "We commend EXIM for hosting today's discussion and look forward to working others to ensure clean, affordable, and reliable U.S. natural gas is available to the global market."

"I congratulate and thank Chairman Reed for her leadership in focusing EXIM on increasing U.S. natural gas exports, an incredibly important emerging issue that benefits our economy as well as our geopolitical interests," said Christopher Guith, acting president of the Global Energy Institute at the U.S. Chamber of Commerce.

The International Energy Agency forecasts that the U.S. will account for one-third of global natural gas production and two-thirds of anticipated LNG export growth by 2025. Under President Trump, the United States has become a net natural gas exporter for the first time since 1957.